The unbearable lightness of FUD

Yesterday someone managed to access this site and write three long angry postings.

NWBO is a failure.
How long has NWBO known?
Why are they refusing to release the data?

The guy writing under the alias of Jacques Rogues, no not the former president of International Olympic Comitee, obviously have had his nerves hit, by our articles about NWBO, because he was very angry.

It was completely the same nonsense, that is served daily ad nauseaum by several of the usual fudspects over at Ihub. It’s so last season.

If Jacques would’ve calmed himself down, he could just have read the articles on KWYH and he would have received answers to all of his questions.

He wouldn’t have liked them of course, since it doesn’t correlate with the outlook and transcripts the fudders receive from further up the hierarchy, used as basis for their $2 a piece postings.

Must be really hard to take a stand, where ones arguments depends upon being completely unaware of what has taken place since October 5th. 2020.

But Jacques did, and we salute him as a great beacon of ignorance, the trait of being a true NWBO bear.

Nothing more trustworthy, than non invested retailers questioning everything about NWBO, never acknowledging the positives as pointed out to you in the timeline of event since data lock and still spending all time arguing on messageboards 24/7.

It is quite telling, that our mission to tell the truths about NWBO, seems to strike quite a few nerves all around, dismantling the rehashed rinse and repeat nonsense. So thanks again Jacques.

Adam Feuerstein has once more been on the war path, with a tweet once more exposing his decade long crusade against NWBO.

Obviously mr. F. watched a video presentation from Aivita, also developing a dendritic cell vaccine for brain tumors, which - as the slide above shows - shows that DCVax-L should have failed and that it somehow should be of “second generation”.

Of course the slide is untrue and thus, AF is lying. But AF often looses it and it seems to be personal for him, that NWBO doesn’t make it. And what is another lie to the pile right?

So what and who are these Aivita guys?

Well, you can watch the video here and then you can see, it looks more or less like - if not a real scam - then some very manipulative people behind this, degrading themselves to manipulate a slide with untrue data

As always the folks at Ihub doing great due diligence, could dismantle the BS within short. 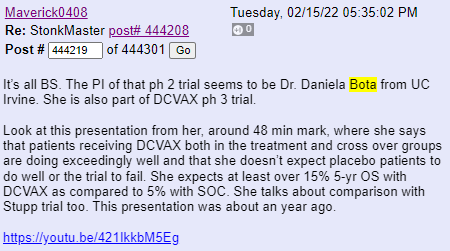 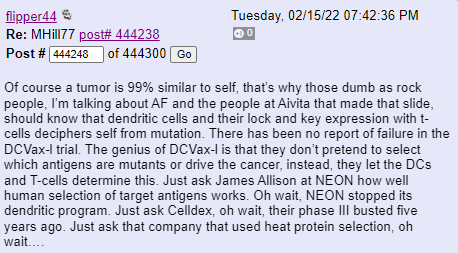 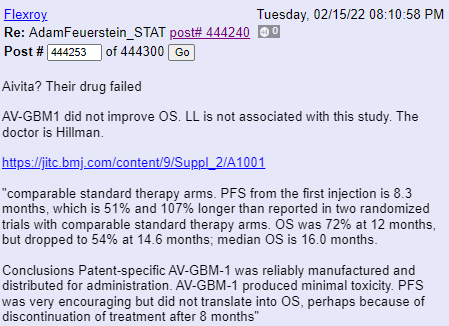 So there you have a sum up of yesterdays nonsense.

I posted last night on Ihub that know what you hold had been breached by the fuders… that post was deleted. Never have I seen a board with so many deleted posts.

Keep up the good work.

Thanks Tommy and do spread the word