I can not say, whether or not, we are about to witness a so-called “mother of all short squeezes” in the upcoming week, but less should be able to do it.

If you have been out travelling, shopping or just been binge watching Deadwood for the umptenth time and feel out of the loop of what is about to go down, then let’s recap some of what happened the last week.

Still not having broken $2 and going into a new trading week, that easily could start of with a PR announcing TLD, is quite extraordinary, considering all the good news and breadcrumbs pointing to unequivocally succesful results.

One could argue, whether NWBO intentionally or not, would want for retailers to get one last shoot at loading up, before things go batshit crazy.

One could also argue, that we already have received so much information, that the stock price in an ideal world without Market Makers intervention, now probably would have been in the $3-5 range. But the SP has been artificially depressed for long now, almost like a coil, through this borderline criminal manipulation.

So, what did we learn in school today?

Well, Friday we had the 2022 UCLA Virtual Brain Tumor Conference, ending with the Virtual Brain Tumor Board and Q&A Session. It had the esteemed UCLA doctor Timothy Cloughesy (Principal Investigator of the UCLA SPORE 1 Project, the combo trial with DCVax®-L and Keytruda), answer a question from an attendee:

It was ALSO confirmed by UCLA doctor Leia Nghiemphu, thereby repeating what she already stated at the same Q&A webinar for the same conference 1 year ago in 2021. 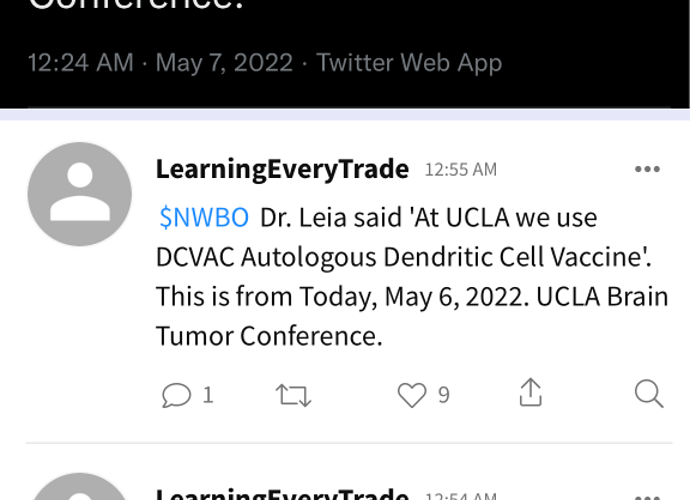 We have refuted the “ATL-DC is not DCVax-L” claim from fudders, by bringing forth around 10 different sources, among these several UCLA doctors, that all confirms, that ATL-DC IS DCVax-L.

Let’s just end that lesson here, with this spot-on generic characterization of the fudders we’ve been up against regarding this “issue”. On Investorshub we can STILL find a pinned posting of Adam Feuersteins attempt to manipulate with this even though it has been refuted ad nauseum for months bringing forth truck loads of factual argumentation.

Just goes to show, what forces we’ve been up against discussing this. 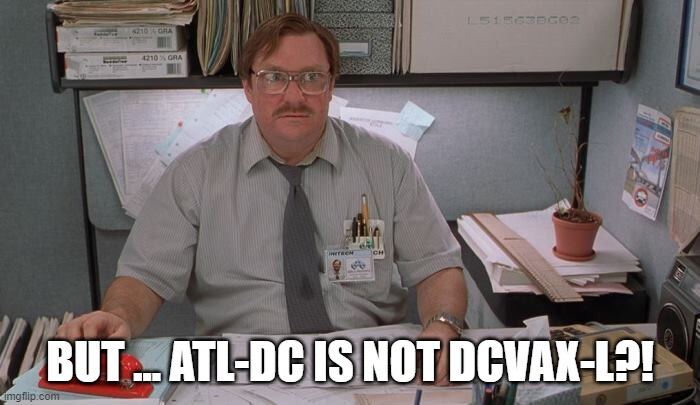 2) We learned that quiet period is over 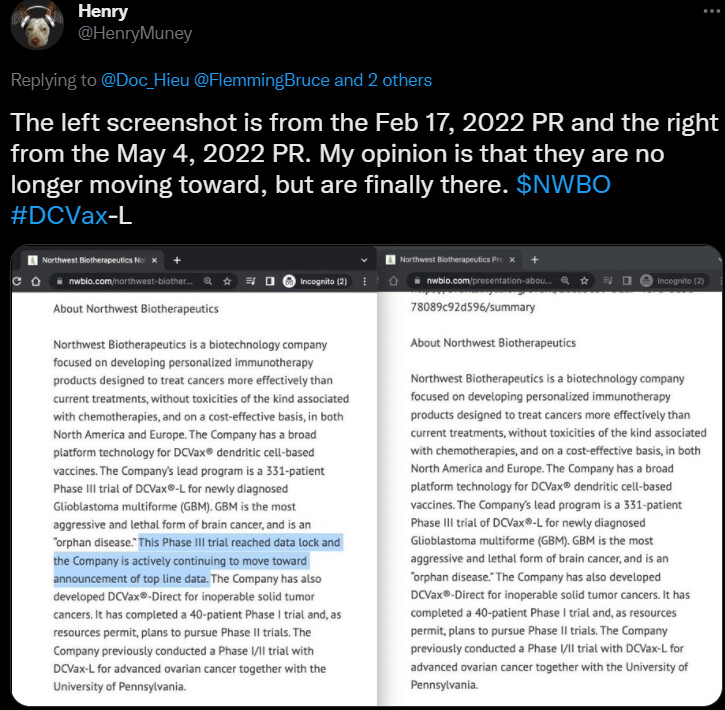 This Phase III trial reached data lock and the Company is actively continuing to move toward announcement of top line data.

Has been an integral part of NWBO’s press releases since October 28st. 2021, but has now been removed from the About section.

3) We learned that Linda Liau WILL talk about trial results Tuesday May 10th.

During the UCLA Q&A this conversation found place between Dr. Cloughesy and Dr. Nghiemphu

Dr, Cloughesy: Oh well, it’s gonna be presented by, I think they just had a press release…"

Dr. Cloughesy: "…saying that it’s gonna be presented by Dr. Liau on the 10th of May at…"

Dr. Cloughesy: "Let me get that exact thing…at…um…The Frontiers of Cancer Immunology Therapy Conference um New York Academy of Sciences so looks like it’ll be at 11:10 am, I’m assuming that’s Eastern Time but I don’t really know. Uh, so that’ll be May the 10th. 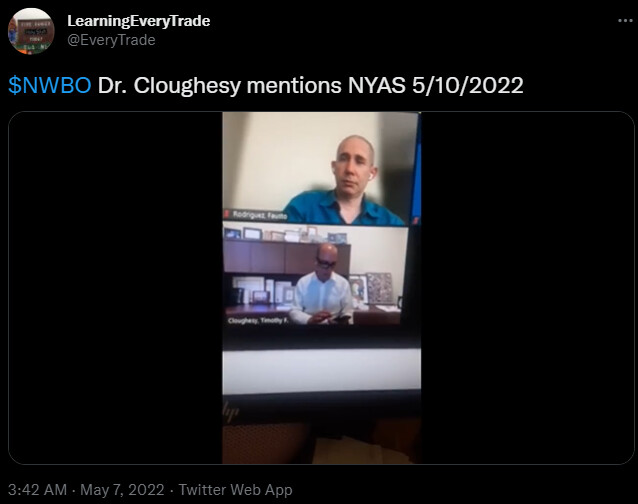 The email newsletter from the Frontiers in Cancer Immunotherapy was sent out with this notification:

The following from NWBO will be attending the event:

Dr. Steven Brem will be there 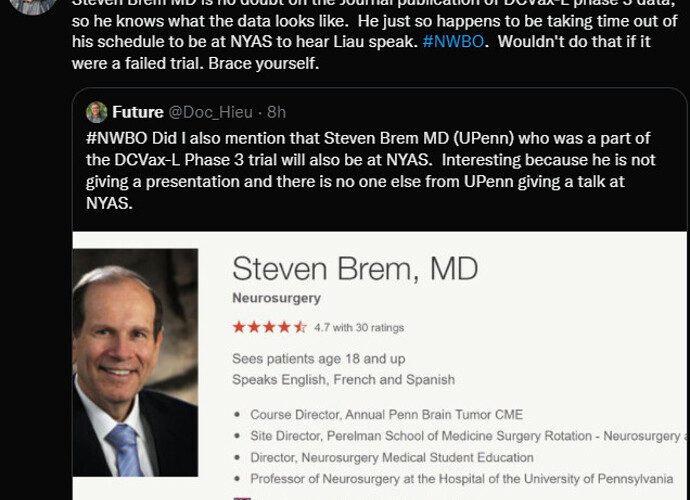 The news is now gaining attraction in other cancer medias. 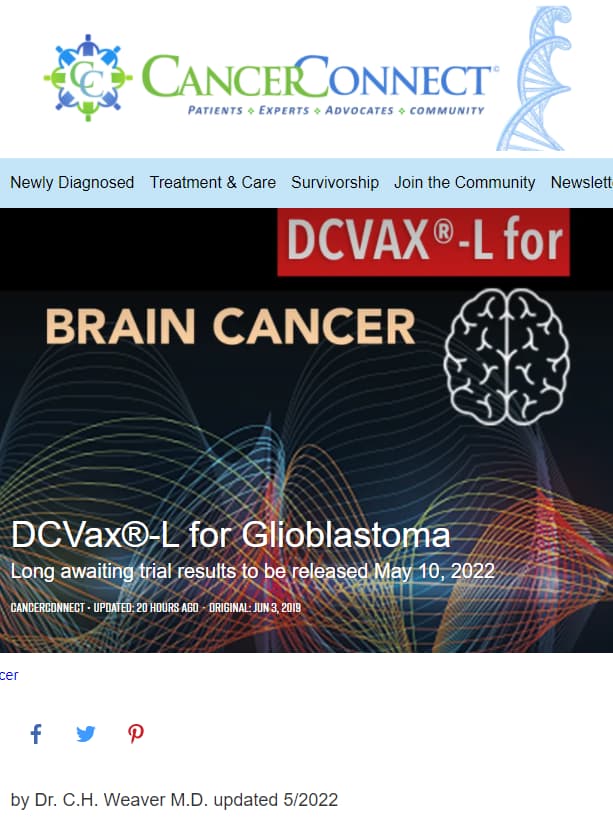 At this point in time I don’t care if anyone are still having doubts about “what is goind to come down” in the next week.

Linda Liau will present results from the P3 trial Tuesday.

TLD HAS to happen beforehand, thus Monday before opening hours, or Tuesday before the event.

Trading can be halted in anticipation of a news announcement

Then remains speculation about the journal. WHEN will it follow and who have gotten the scoop?

NO ONE - and especially not Dr. Linda Liau - gets a session in New York in order to explain a failed trial. You neither get all of NWBO and the Flaskwords employees and survivors having been treated with DCVax-L, to attend.

Do you want to see something cool before we ends? 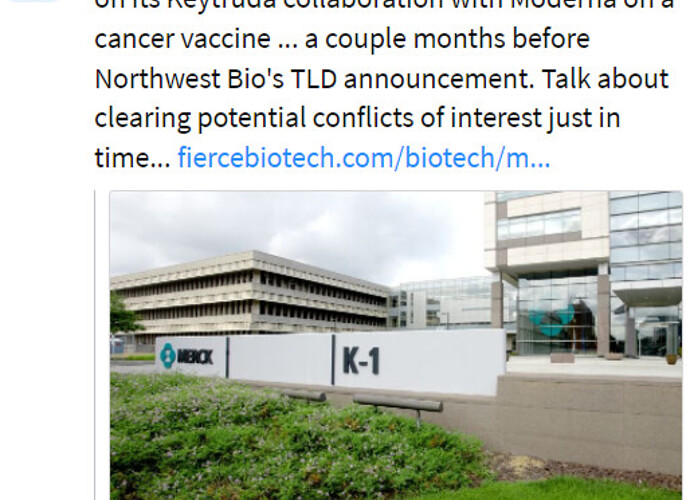 Excerpt from the article:

Merck has dumped Moderna’s mutant KRAS vaccine mRNA-5671. The action, which comes shortly after Merck closed enrollment in a phase 1 trial, leaves Moderna pondering the next steps for the program.

In 2018, Moderna granted Merck the chance to opt in to the co-development of mRNA-5671 after the completion of human proof-of-concept studies. Yet, while Merck had until after the delivery of phase 2 data to make a decision, it has opted to walk away before wrapping up a first-in-human study in patients with non-small cell lung cancer, colorectal cancer and pancreatic adenocarcinoma.

Yes, Merck is now focusing all on the combo trial with DCVax-L.

Think about that once more. Merck has dumped Moderna.

You can not fathom what is about to go down in this week. Talking about exit strategies and selling while still on the OTC and institutions having yet to buy in, awaiting approval and this about to go haywire viral. You must be out of your mind.

To all of you who still pursues the bearish fudding approach the coming week.

Did we mention the interest in NWBO from Denmark? 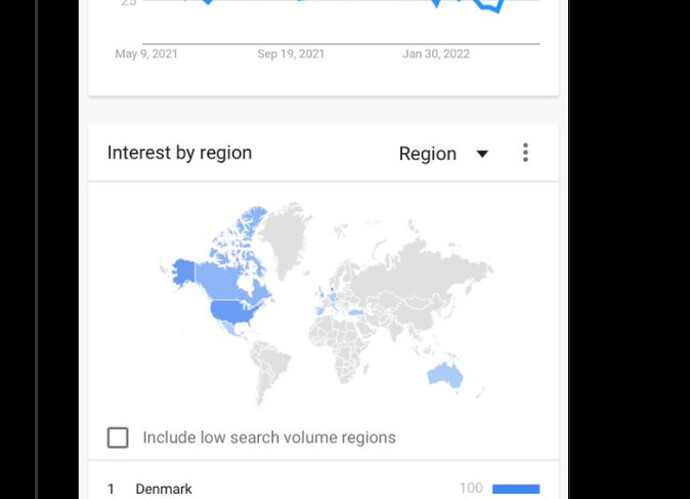 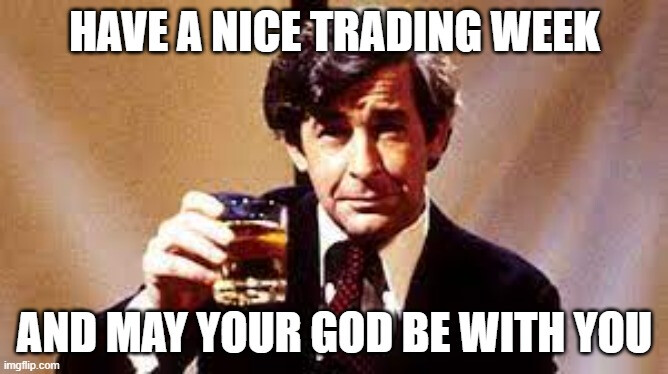