The infinite rottenness of a system

In my article “The Longest Day” from May 10th, I specifically ended it saying.

I’ve stated it yesterday, and will state it again. If investors do not receive the trial results today and this presentation ends up being a “beating around the bush” talk about P3, I will refrain from any further commenting on NWBO here and on any other boards and sites.

I have secluded, confined and restrained myself from discussing anything regarding NWBO and the results of the P3 DCVax-L trial, since they were revealed on said day, Tuesday My 10th. by Paul Mulholland at the NYAC conference.

By no means was I disappointed with the results being put forward.

So since I’m still here, it seems as if I was right about my predictions above.

Remember, we received results last Tuesday, but we still haven’t received TLD. NWBO has not been PR’ing these. This is probably due to formalities between the journal in which the publication will be announced,

With that in mind I have really been trying to start to compile a new article today, in light of last weeks events and trying to just let everything “sink in”.

Should I write about the prospects about the quality of the data, or about the forces in play, that have reasons to try to dispel these as being bad and litteraly claiming that the trial failed its endpoints?

Let’s get that out of the way already.

The Original Endpoint of PFS (progression free survival) did not fail, because of two things.

The relationship between PFS and OS becomes more complex in the context of biologic and targeted therapies. Some of the recent novel targeted and immunologic agents have demonstrated relatively low PFS improvements, but dramatic improvements in OS (long periods of post-progression survival)

To get back on track. I started today compiling an “all round” article about events, but in light of recent news, I have decided to succomb to despair and baby will put himself quietly over in the corner and just await that some kind of game plan from NWBO will start to unfold before ASCO.

It is of no news that STATNEWS, the journal that has employed Adam Feuerstein to front his decade long lies and vendetta against NWBO, is still fronting his manipulation in spite of results being good.

But having to read this in AACRJournals.org … this is now becoming ridiculous. Are laymen more knowledgeable about progression free survival, than people writing for Cancer research journals? 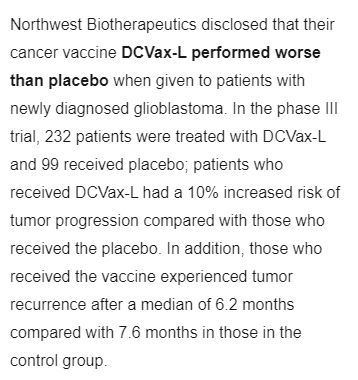 I am be no means deterred by the science, the results or the potential of DCVax-L. We’re sitting on a gold mine.

But after 19 months of quiet period, it is not me or other hard core “long” retailers, who should be trouncing the incessant lying and manipulation that is now taking place.

I took a break this week from reporting, because your system is not only rotten. It is decayed and corrupt. You do not have two journals so openly reporting clearly manipulated data, that play into bears and Market Makers hands. The rottenness is to be found at top of the pyramid, where Market Makers easily are in control of the stock price. The middle men are the “journalists” that somehow are able to make a living running their own private vendetta at journals, while their colleagues somehow must think

… What the fuck is going on here in my workplace?

And the last piece in the pyramid are the the low life fudders on social medias and stock messageboards that are doing their masters bidding, having no decency at all. I can’t be bothered mentioning them anymore. They are coming out now in swarms like locusts.

I’m disgusted at every level of what I’ve witnessed this week, at all levels of the pyramid. My contempt for the people doing their masters bidding has reached a new height, where I have to try to stop participating in discussions, because it does no good to me.

I’m getting sick to my stomach, how criminal activities are being carried out so openly and as if everyone just accepts … that’s how it is.

Anything good at all for me to report?

Yes the company has requested for clinicaltrial.gov to have its primary and secondary endpoints updated, thus reflecting results. 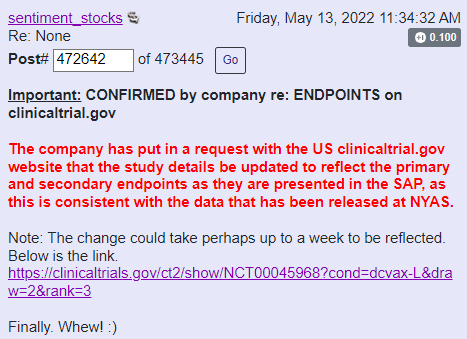 That contributed to years of unneccesary discussions with bears, as well as it was a catalyst for at all doing the shorting against NWBO last Tuesday.

From a science and result perspective things looks good.

But we’re not living in an ideal world. We’re dealing with scumbags on all levels.

We need to get the oncologist community to raise their voices in support of DCVax-L and show they recognize results.

We need it to go viral, to get media to report facts and not lies.

And we desperately need for NWBO to have drawn out some kind of game plan for the next three weeks.

On a personal note, I’d like to push in SEC chairman Gary Gensler into the equation and somehow praying for justice. I wouldn’t mind either if Cofer Black joined the fun. And I sure wouldn’t mind to see people behind bars for what they have contributed to along the way, in terms of criminal activities.

Other than this, I can’t be worried about that shit on a daily basis anymore. It’s too much to deal with that magnitude of corruption and rottenness for an investor in Denmark, who just happened to fall in love with the science.

Though silently … I still root for the good guys!

Thank you, DD. Please keep up the good fight!

Beyond the corruption of ignored criminal activity and systematic oppression from the competition, everything’s fine here, just fine.