Roger Stupp & the significance of his support of NWBO

It was discovered by @Evaluate over on the NWBO iHub forums late last night (1/22) that Roger Stupp has been advising NorthWest Biotherapeutics since at least September 26th, 2020 which happens to be roughly 1-week before NWBO locked their data.

This post aims to convey the significance of Roger Stupp’s role in NWBO’s trajectory and explain why this is another important piece of evidence on the path to DCVax approval. As @Michael-Bigger puts it, this is a great example of information entropy:

Information Entropy: The core idea of information theory is that the “informational value” of a communicated message depends on the degree to which the content of the message is surprising. If a highly likely event occurs, the message carries very little information. On the other hand, if a highly unlikely event occurs, the message is much more informative. For instance, the knowledge that some particular number will not be the winning number of a lottery provides very little information, because any particular chosen number will almost certainly not win. However, knowledge that a particular number will win a lottery has high informational value because it communicates the outcome of a very low probability event.

With that said, let’s talk about who is Roger Stupp?

As a little bit of background, Dr. Roger Stupp is an internationally recognized neuro-oncologist and a leading authority on primary and metastatic brain cancer. He serves as Professor and Medical Director of the Malnati Brain in the Department of Neurological Surgery, and Division chief of Neuro-Oncology in the Department of Neurology as well as Associate Director for Strategic Initiatives at the Robert H. Lurie Comprehensive Cancer Center of Northwestern University in Chicago. (Ref: PracticeUpdate.com)

Dr. Stupp was the lead clinical investigator for what is now the the standard of care (SOC) for the treatment of glioblastoma (GBM), often referenced as the Stupp Protocol. As noted on practiceupdate.com:

Dr. Roger Stupp was the lead investigator for establishing the use of temozolomide chemotherapy in conjunction with radiotherapy in patients with newly diagnosed glioblastoma. In this seminal work Drs Stupp and Hegi also demonstrated the predictive value of MGMT gene-promoter methylation, a biomarker that has since become standard.

In addition to his work on establishing the current SOC, Dr. Stupp also led the way on what is one of the only other FDA-approved available treatments for GBM by a company named Novocure. The treatment, most commonly referred to as Optune (the device used) or TTFields is a:

…therapy is delivered by a portable, non-invasive medical device designed for continuous use by patients. In vitro and in vivo studies have shown that TTFields therapy slows and reverses tumor growth by inhibiting mitosis, the process by which cells divide and replicate. TTFields therapy creates low intensity, alternating electric fields within a tumor that exert physical forces on electrically charged cellular components, preventing the normal mitotic process and causing cancer cell death. (Reference)

If one would like to read further on the depth & importance in his role, there are two items below for your reference:

Now let’s get to the meat of this; Why are his advisory services such a significant discovery for NWBO?

Point #1: The Stupp Protocol is one of the main historical controls that the DCVax trial will likely reference for comparative data to support approval:

As some back story, earlier this year I was able to get on to a Zoom call where Dr. Linda Liau gave a rushed 5-minute presentation to the Congress of Neurosurgery (CNS) and recorded her presentation here for the investor community here. On this call Dr. Liau was not able to get the full timeframe that she was targeting but, the focus of the dialogue was solely around the use of historical control arms for clinical trials. One slide of extreme relevance was her reference to the Stupp protocol as the standard for comparison:

While this wasn’t a surprise, it’s been discussed all along that the historical control arm that would make the most sense, would be that of the current SOC, the Stupp protocol. Any one that has done any level of due-diligence will have seen this comparison chart here by @ATLnsider that compares the survival benefit, deduced from DCVax interim data analysis, to that of all of the historical data available for GBM survival: 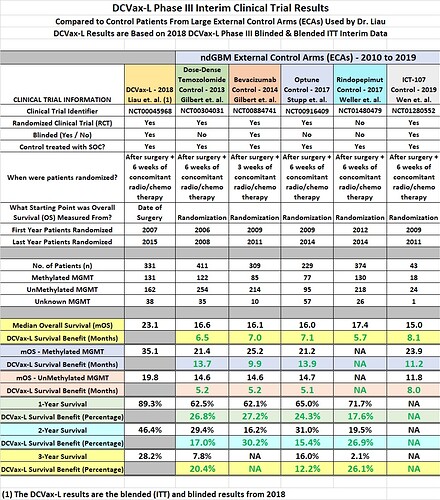 Point #1 Conclusion: The conclusion that I believe can be logically drawn here, is that having Dr. Stupp onboard and his successful & immense experience parsing survival data, who has defined one of the most-recent scientifically accepted control arms, has immense benefit in supporting/guiding the ultimate regulatory authority approval of DCVax.

Point #2: Dr. Stupp is a consensus leader in the scientific community and was once, on record, critical of DCVax, but now is an obvious supporter of the platform treatment.

In what appears to have been a negative hit piece on the DCVax interim data analysis posted at: Dendritic Vaccine for Glioblastoma: Hope Hyped, Say Some - Dr. Stupp stated that:

Stupp indicated that if time from surgery to randomization were deducted, OS would not differ from what is currently seen in this patient population. 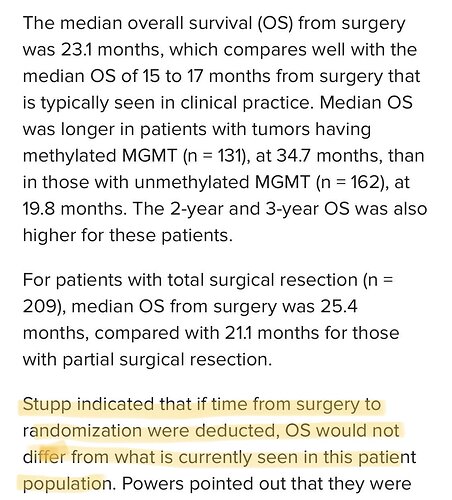 At the time this was written, Dr. Stupp had significant reason to find flaws in the interim data as it was directly competing with the Optune & TTFields treatment.

Point #2 Conclusion: Dr. Stupp’s role as a now advisor to NWBO is a 180-degree turn to his previous notes. One can ask what changed? I would be willing to go on record to speculate with a high degree of confidence that it is more than likely a look in at the irrefutable positive trial data that we are waiting on.

What is even more interesting is that Dr. Stupp no longer lists Novocure as a company that he advises. Has he completely jumped ship from Novocure to avoid conflict of interest?

It’s been stated many times by the likes of Linda Liau and other prominent long-term investors that the critical path for NWBO would be to gain the support of the scientific community, the FDA, to avoid throwing the baby out with the bathwater. Having Dr. Stupp as a key supporter & advisor for the DCVax platform is a major milestone representing that they are successfully achieving just that.

As a final note, I believe it to be paramount to simply step back for a moment and look at what Linda Liau and the NWBO team are doing for the oncology clinical trial landscape, that goes beyond the DCVax platform. They are shifting the entire scientific community and regulatory authorities towards using more ethical standards to fast track treatments to approval. This will yield incredibly significant improvements to patient care and ultimately improve/save thousands of lives for years into the future.

Please share your thoughts and comments below! Cheers!
-Nick119 aka KnowWhatYouHold