Preface:
NWBO has received constant criticism of it’s phase 3 trial design over the 15+ year timeline from when the trial was created. While there have been many ‘short’ arguments against the trial design, this post focuses specifically on the change of primary/secondary endpoints around the conflict of how immunotherapy & progression-free survival relate to the interpretation of patient’s ct-scans.

Originally when the NWBO trial was created, they targeted the primary endpoint of PFS also known as progression-free survival, with the secondary endpoint of OS, overall survival. To be more specific, the clinical trial on the FDA trial registrar still states:

Primary Outcome Measure: The primary objective of this study is to compare progression free survival from time of randomization between patients treated with DCVax-L and control patients.

Secondary Outcome Measure: The secondary objective is to compare overall survival and time to disease progression between DCVax-L treated and control patients

To dive a bit further, during the course of the trial, the team interpreting the CT scans of the patients receiving DCVax-L were noticing what was believed to be progression of the patient’s tumor despite vaccine treatment. However, what was also noted was that despite this data showing potential progression, the patients were still alive & incredibly healthy. Upon a deeper look, it was discovered that this was in fact not progression, but rather the DCVax-L treatment attacking the tumor. This was established to be what is now called pseudo-progression, which was not previously known or understood prior to this time, as immunotherapy treatments are very new to the market. There have even been great papers written on this subject since, such as How to differentiate pseudoprogression from true progression in cancer patients treated with immunotherapy for those who would like to take a deeper read.

Now that you understand the unforeseen issue with pseudo-progression and the dynamics of the ever-evolving landscape of immunotherapy, let’s talk about how NWBO has successfully handled this challenge.

Change of Endpoints & Regulatory Buy-In
When this revelation initially occurred, it caused considerable concern in the investment community. Would our trial still hold up? How will this finding be handled with all regulatory bodies across all of the countries that this study is being conducted in?; USA (FDA), UK (MHRA), Germany (BfArM) and Canada (Health Canada). Can the company amend their SAP (statistical analysis plan) for the trial to adjust these endpoints?

The short answer is yes, and we have evidence that they have.

While the company has not (& cannot) disclose conversations with regulatory bodies, through incredible due-diligence within the investment community & piecing together press-releases and dialogues with Northwest directly, we can objectively determine the path that has been taken.

The facts that will help one walk this path are outline and pulled from an incredible post by @ATLnsider on the IHub boards:

Fact #1: There is only 1 DCVax-L clinical trial. It started in the US first & it was approved by the FDA first, before any of the other 3 RAs.

Fact #2: The 1 clinical trial is based in the US, but it is being conducted in 4 different countries (US, UK, Germany & Canada)

Fact #3: There is only 1 SAP for this clinical trial.

Fact #4: The SAP is the same in all 4 countries, with all 4 regulatory authorities (RAs).

Fact #5: NWBio said that they would not unblind the data & let the statisticians start the process of reviewing & analyzing the data until they got buy-in on the SAP from all 4 RAs; in which here is a direct quote from the 2018 Annual Shareholders Meeting which took place on 2/2/20219 at 1:30 EST:

Question #10: Is there ongoing dialog with the FDA regarding formation of the SAP and will you wait to unblind until after the SAP is approved?
Answer (LP): “Definitely ‘yes’ we won’t unblind until the Statistical Analysis Plan has been approved by all regulators. FDA and other, four regulators. We intend publicly as a company policy, which is pretty standard for companies, we don’t talk about our communications that are ongoing with FDA or other regulators. We only say results, so I can’t comment on interim communication type things, but in case there is any [lack of] clarity about remarks earlier about the SAP, it is an actual submission to the regulators. Like when you apply for an IND, that’s Initial New Drug, application to get a clinical trial approved or when you apply to get a new product approved. You make an actual submission to get your SAP reviewed and approved.”

Here is also a direct quote on this subject from their June 2019 press release:

As soon as the SAP is finished (including review by advisers), it will be submitted to the regulatory agencies for each of the 4 countries where the trial was conducted, for their comment and buy-in. As soon as the SAP process is completed with the 4 regulatory agencies, and the simultaneous data checking is finished, the trial will be unblinded and the data analysis stage will take place and result in top line data.

Fact #7: NWBio said they would not lock or unblind the data until they got buy-in from all 4 regulatory authorities, then on 10/5/2020, NWBio issued a PR saying they had locked the data.

Fact #8: Then, 3 days later on 10/8/2020, @ATLnsider discovered that the EU updated the endpoints in the clinical trial registry for the UK.

Fact #9: A few days later, the clinical trial registry for Germany was also updated with the new endpoints.

Conclusion:
Taking special note on the fact that the RA’s in Europe are responsible for updating the trial registry with the new endpoints, the direction communicated directly by Linda Powers and the timeline by which these events unfolded, and you’ll see that these facts fit together (as @ATLnsider puts it) ‘like a glove’.

The UK’s clinical trial accurately reflect the updated SAP and constitute as buy-in from all 4 RA’s: 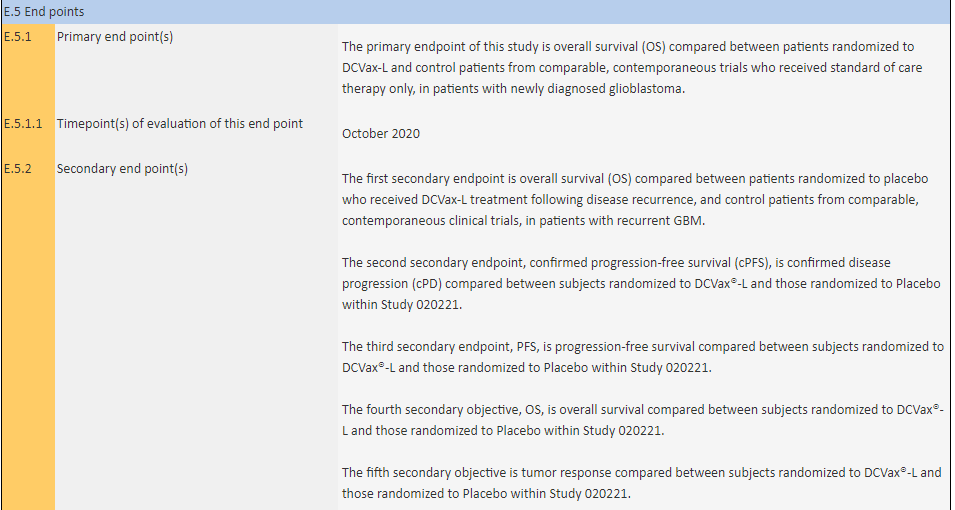 Based on these significant data points, I believe it can be confirmed that the NWBO leadership team has successfully & brilliantly navigated this hurdle around the pseudo-progression discovery & change of endpoints.