How does one valuate NWBO? 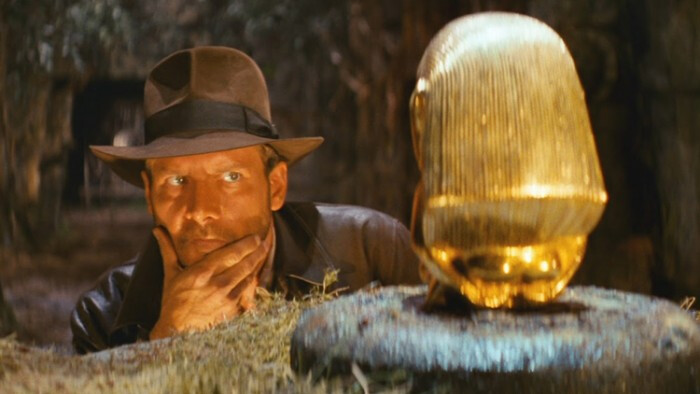 Deep down, as retailers, having a positive TLD and a journal to support the data on hand, we’re of course interested in the future of NWBO. Many investors have been aboard ever since the trials beginning and one can only imagine that roller coaster of a ride and what has been endured in terms of waiting, watching the share count gets diluted and witness an endless decline in price pr. share.

With data lock October 4th. 2020 and the strategy to pursue a scientific journal to document results, everything changed over night. A self-imposed quiet period took over and statisticians started working on the data. Assuming March 2021 as point in time where summaries were ready and NWBO got unblinded, we’ve just about passed the 300 days marker for the peer reviewing of the journal and thus the release of top line data could come any day.

That makes up for quite a few questions for shareholders, in terms of investment strategy. Swing trading in hope of selling on spikes and buying lower, or holding?

A lot of parameters will be in play for valuation of the stock price. The quality of top line data. Buy in from all 4 RAs. When will we see approval? Capacity in terms of patents pr. Month. Flaskworks certification and manufacturing through the MicroDen/EDEN operatus.

December 21st. we received the PR for MHRA certification of NWBOs production site at Sawston, England, which stated the following as to manufacturing capacity:

To date, the Company has developed Phase 1A of the facility, comprising approximately 4,400 square feet of the overall 88,345 square feet. The Company anticipates that Phase 1A alone will be able to manufacture DCVax-L products for 45-50 patients per month, or 450-500 patients per year – a significant increase from the current manufacturing capacity of four to six patients per month which, to date, has been taking place in a GMP clean room facility in London, UK.

But with a 100% utilization and the current technology in place, that could make for an annual revenue between $2,25-$2,5 billions for 10.000 patients.

If an estimation was to occur ONLY calculated on behalf of the annual revenue from a 100% utilized Sawston factory, then we can use the conservative, the moderate and the optimistic valuation approach, which is to multiply revenue by 5, 10 or 15.

Let’s go with the moderate amount, which then leaves us at a number around $25 billions. That is, a simple valuation solely done on the potential of DCVax-L and the capacity of manufactoring vaccine doses at Sawston using the “old way”.

And if/when DCVax-L becomes standard of care - SOC - for GBM, we can expect a surge in patients from all over the world.

We have to keep in mind, that a certification of Flaskworks is in the work and probably will come in Q1 or Q2 2022, which will make it possible for NWBO to ramp up the production of doses considerably, estimated a factor of 10.

On an international scale, Cognate will presumably also by involved in helping manufacturing doses of DCVax-L to be able to live up to the demand.

Another important parameter in the valuation equation though, is the next vaccine in the pipeline. DCVax-Direct, the vaccine for all types of inoperable solid tumors. The updated data from the phase I trial in 2016 showed remarkable results. And many regards this, as the crown jewel of the DCVax vaccines.

Yet another parameter is the ambitious 265 patents portfolio, which NWBO has managed to “put together” over the years. It is advisable to look closely at this excerpt from NWBOs annual report 10K from March 31st. 2021.

In addition to our patent portfolio, we have obtained Orphan Drug designation for our lead product, DCVax-L for glioma brain cancers. Such designation brings with it a variety of benefits, including potential market exclusivity for seven years in the U.S. and ten years in Europe if our product is the first of its type to reach the market.

Because the case with the DCVax vaccines is, that they are BOUND to disrupt the whole glioblastoma “arena” and become the new standard of care, thus digging in to the revenue of a huge big pharma industry currently revolving around old age wisdom, like chemotherapy.

The biggest of all “big pharma players” is Merck, when it comes to glioblastoma. Their key product Keytruda, has been a golden egg in terms of revenue during the years. But, as with all good things, the run must come to an end, and Merck’s patent exclusivity on Keytruda expires in 2028. In 2020 Merck brought in $48 billion in worldwide sales, of which Keytruda made up $14.4 billion. 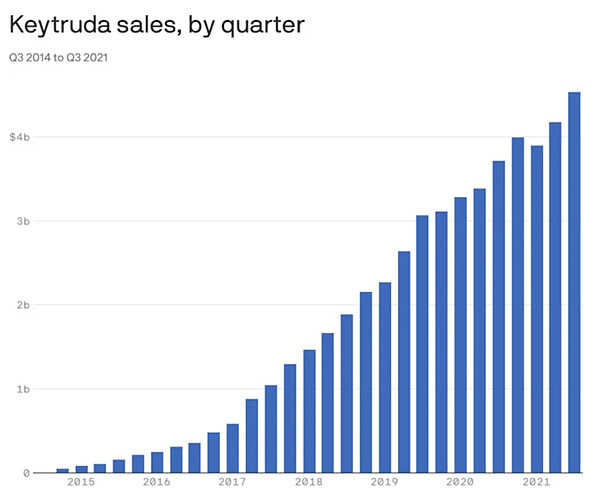 That’s why Merck is on the lookout for something new and clinical trials with Keytruda under the generic name Pembrolizumab has been under the way at UCLA, together with a vaccine therapy called ATL-DC, which is the generic name for DCVax-L.

In an interview, former CEO of Merck, Kevin Frazier said:

“We’re … increasingly having a better line of sight to what’s coming through our pipeline, so we continue to feel good about that. That doesn’t mean the company is against making deals; on the contrary. Merck needs to continue to focus on getting the best external science we can, both in oncology and outside oncology, to diversify our portfolio, and we’re going to continue to focus on that. It’s a sentiment he’s shared with investors before, but still, “in our one-on-ones, almost every one, people say, ‘You say that, but why haven’t you done the deal?’ Merck has done deals—120 transactions in 2020 alone, to be specific. But it’s clear those aren’t the type shareholders are looking for to calm their nerves. I think what people are saying is, ‘We’d like to see you do something bigger and later-stage’”

Of course, “bigger and later-stage” comes with a heftier price tag—and Frazier is well aware. In a not-so-subtle reference to Gilead’s $21 billion Immunomedics buy, he mentioned the “very large prices” that have been attached to biopharma deals made in the last year or so.

"Right now, biotech’s at an all-time high. If you’re going to try to acquire those assets right now, you’re going to pay a very steep price, and then a premium on top of it. And on top of that, anytime somebody’s going after something, it turns into a bidding war.”

Earlier this year Merck paid $11.5 billion for Acceleron, a biotech researching in rare diseases and last year Gilead acquired Immunomedics in a $21 billion deal, to add the drug Trodelvy - First-in-Class Antibody-Drug Conjugate Approved to Treat Triple-Negative Breast Cancer, With Promise in Other Forms of Breast Cancer and Additional Solid Tumors.

If you want to value the worth of NWBO, then you HAVE to deal with the value of ALL of the goods. There are 3 kinds of scenarios.

I will make the assumption, that there will be around 1.4 billion shares if all stock equivalents were to be exercised.

When people say a stock price of $5-10, then that amount is by itself covered by the lowest multiplier of 5, of a Sawston revenue, that is based upon the old way to make DCVax-L doses.

That was after positive TLD, buy in from 4 RAs, approval of DCVax-L

So what are “this” for then? 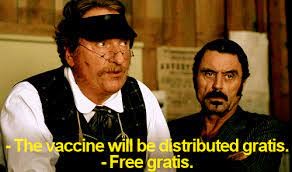 This site is named Know What You Hold and if one – as an invested retailer – believes NWBOs worth to be below $10 a share, then you should dig in and give it a study or two more.

NWBO is not a company full of employees. There are around 20. Manufactoring is done at Sawston on contract with AdventBio. NWBO is a very slender entity, that is made to be bought out.

But that doesn’t mean NWBO, will not be able to either choose a partnership or just do the job themselves.

“And as we said last year, if we were to get the proverbial ‘offer you can’t refuse,’ we wouldn’t refuse.’”

“In addition to the stock price and the timing of what to do. I think that the biggest meanest players, they have 100s of billions of dollars in their revenue stream related to the basics of chemo and radiation. If we take a step back and use conservative words, their effectiveness in terms of the response rate is much worse than ours, they cost a lot more to make if you’re looking in the immuno-therapy area, and they’re much harder to administer, much more toxic, I mean we’re really kinda good in that area, and of the hundreds and hundreds of billions a large chunk is just the money they make from the drugs that ameliorate the effectiveness of the painful stuff. So if you take a step back, they don’t mind picking up another, which is the subject of what we said a week ago yesterday, another targeted immune therapy. But we cover all solid-tumor cancers. Potentially. That’s what we’re working on and that’s what they would be buying.”

That NWBO is in data lock and awaits TLD after a 15 year long trial, is actually against all odds. Much is owed to Linda Powers on that account and she has not come to the finishing line, just to hand over the duck with the golden eggs to big pharma for a measly, lousy $20 a share.

DCvax-L will have orphan drug designation. It’s patent will be nice and long. Keytruda rakes in billions of dollars each year and that creature could get its life prolonged by doing the Keytruda/DCVax-L waltz, which we saw is currently in trial at UCLA.

Do not miss out on former Merck CEO Ken Fraziers words.

That could very well be the final endgame. Because the circumstances is not just about the efficacy of one vaccine. It’s about the disruption of the glioblastoma business. About a new standard of care. In an area of the cancer arena, where biotech upon biotech fails their trials again and again, which is why chemo is still what patients have to look forward too.

Personally I will put my money on a quick buy-out during 2022, because big pharma won’t have the money to stick around and just wait and see. The SP price will climb for every step NWBO manages to move forward.