It’s been around 100 days since we’ve had anything to report at KWYH.

It’s not that there’s been nothing to report, but that our usual place for catching up with quality due diligence - Investorshub (IHub) - got totally bogged down with spread of FUD (fear, uncertainty and doubt) in the wake of the short attack on NWBO May 10th., pertaining to new users and while I’m personally restricted to one post a day on Ihub , because stating the obvious can cause offence to the fudding elements on said stock board, I was quite fed up by the bull spouted by the bears and it felt ok to take a nap on the bench.

But I feel it’s time to get down for a recap, on what’s been going on during the summer period and what we are about to witness going down this autumn.

This first article will focus on “what went actually down” around the period of that fateful day. The presentation of results May 10th. where we saw Market Cap go from $2B to $0.5B in the course of a few hours. and the aftermath of that.

First, let’s just state the obvious for any invested long in NWBO.

YES, it is absolute GUT WRENCHING to still be sitting here almost 2 years after data lock, waiting and looking at a reduced stock price trading around $0.70 day in and day out, when we were at around $2 in the days moving up to the presentation of results at NYAS May 10th.

The short attack hit us. A couple of days before the presentation, Adam Feuerstein, started to block all NWBO positive posters on Twitter as if to “counter something”.

Knowing the presentation NOW, we all know, the data presented was an excerpt of top line data, covering the primary endpoints being met, significantly and statistically reached and with landmark results that hadn’t been seen better for the last 3 decades. So he intentionally lied about this. That no news about data was to be presented.

He didn’t care of course, so STATNEWS printed his lying hit piece, where he claimed the primary endpoint was not being reached. 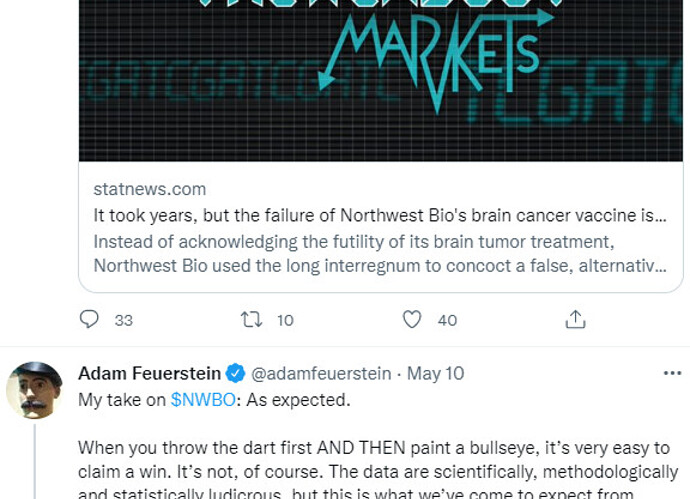 He followed up with more intentional lies, namely the arguments, that the primary endpoint was PFS (progression free survival) and that the new OS endpoint was being moved to AFTER NWBO was being unblinded from the data. 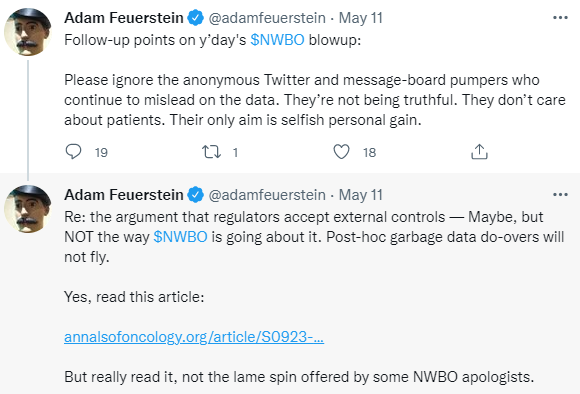 Two arguments that has been stated over and over ad nauseam by bears, who insists on being blind from facts.

The Kiss of Death to Bear Arguments

So let’s take them down, once and for all.

In 2020, NWBO officially changed the study protocol to replace original endpoints to new ones, which was SEC filed March 2021 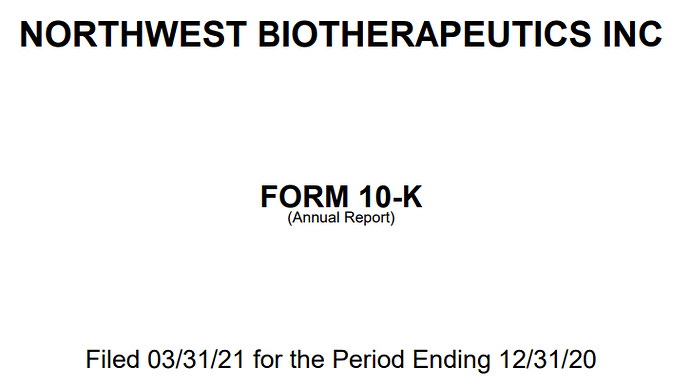 NWBO got unblinded as was ALSO stated within the presentation slides May 10th.

The statistical analysis plan that we submitted to regulators for the Phase III trial embodies a different primary endpoint and secondary endpoint than did the original Protocol for the trial. Under the Protocol the primary endpoint was progression free survival, or PFS, and the secondary endpoint was overall survival, or OS. Both of these endpoints were confounded: the PFS endpoint by pseudo-progression, and the OS endpoint by the “crossover” provision in the trial design, which allowed all of the patients in the trial to cross over to DCVax-L treatment after tumor recurrence (while remaining blinded as to which treatment they received before tumor recurrence)

Why did NWBO change the endpoint? Well you should DEFINITELY read this article from Seeking Alpha in the wake of the presentation of results May 10th.

It covers the pseudo progression issue, that NWBO changed endpoints WHILE being unblinded.

The article also covers the trial design - why the use of external control arms was LEGITIMATELY pursued - in the P3 trial and which correlates with the article External control arms in oncology: current use and future directions from 13 FDA authors including Richard Pazdur from January 2022.

With the latest press release from NWBO August 23rd, it was stated that the MHRA - the equivalent of FDA in the UK - has approved the Pediatric Investigation Plan (PIP) - the conducting of two coming trials with 24 children in each, to be treated with DCVax-L on the same treatment schedule as in the Company’s Phase III trial in adult glioblastoma patients. 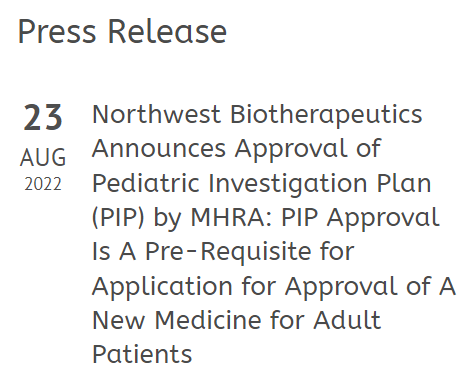 The final nail in the coffin for shorters and fudders alike, are the inherent approval of precisely the external control arms trial design of the P3 trial and the OS endpoints, since MHRA approved the PIP plan with these being the same.

The question that remains is, if there will be any litigation, any aftermath in the wake of the coordinated attack on NWBO May 10th?

It is an undisputed fact, that Adam Feuerstein CHOSE to publish arguments, he without doubt as a biotech journalist must have known, were long past the expiry date.

He misinformed about there would not be new data to present.

The results which were presented on the website Virtualtrials belonging to Al Musella from the Musella Foundation, was being DDos attacked during and after the presentation by hackers.

Al Musella also “happened” to get banned from Twitter

STATNEWS has never retracted Adam Feuersteins hit piece even though it has long ago been proved to be untruthful and two other medias has since retracted it. How come STATNEWS continues not to listen?

And AACR waited till July 29th. to retract the information 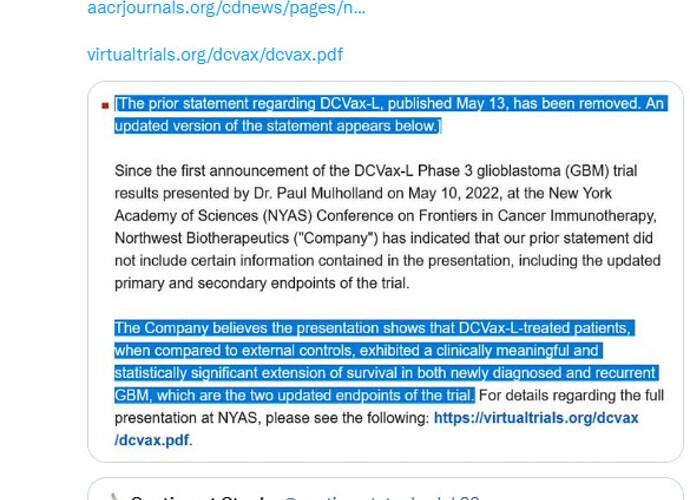 And Adam Feursteins information regarding Linda Liau have shown to be controversial to say the least. In the aftermath of the attack, Michael Bigger, NWBO investor with around 30 mio shares wrote about a threat that Linda Liau had received:

Journalist Joan Lappin chimed in on May 19th. insinuating that Linda had received a signed letter with threats.

I am following NWBO and DCVax-L and have spent the better time of 2 years for getting to the bottom of due diligence regarding the science and being confident in my investment. As such I have quite frankly been uninterested in other cancer treatments in the market - approved as in trials - because the presented DCVax-L results are so groundbreaking. Not just for the P3 trial, but for the already mentioned intermediary results from combo trials with checkpoint inhibitors (Keytruda) and poly-iclc, which Linda Liau has been presenting at least three times during the last year, mentioning up to 50% efficacy.

But there COULD be a possible connection tying all of the above together. Adam Feuerstein, STATNEWS, AACR printing Feuersteins disinformation article and some of the fudders on stock boards.

A common interest in Novocure and its brain cancer treatment Optune.

STATNEWS seems to have been positive with their reporting on the Optune treatment, perhaps helped along with some sponsored content.

AACR have been awarding Novocure grants and awards for years. 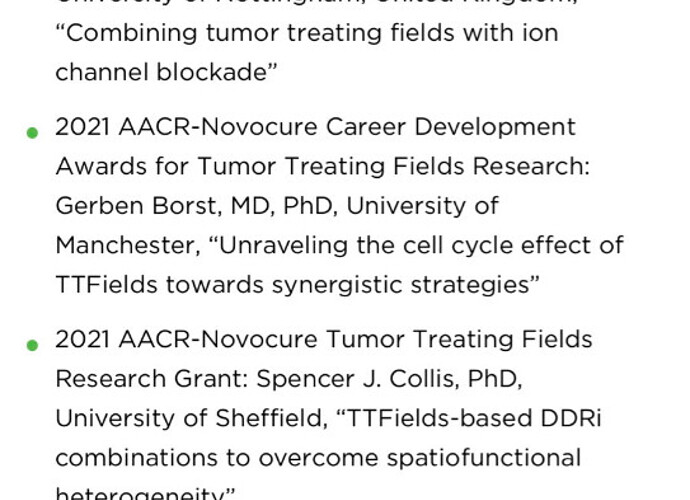 And even Linda Liau has in an interview with Bill Malloy stated her personal criticism towards the Optune treatment, the trial results and the approval of it.

Look at what she said in that interview:

The whole ordeal about the Novocure trial, the results and the approval, has been further scrutinized on Ihub: 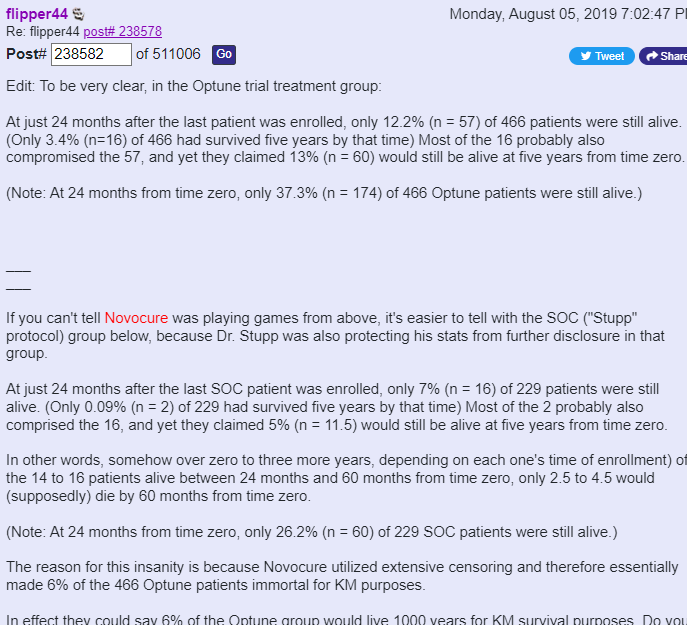 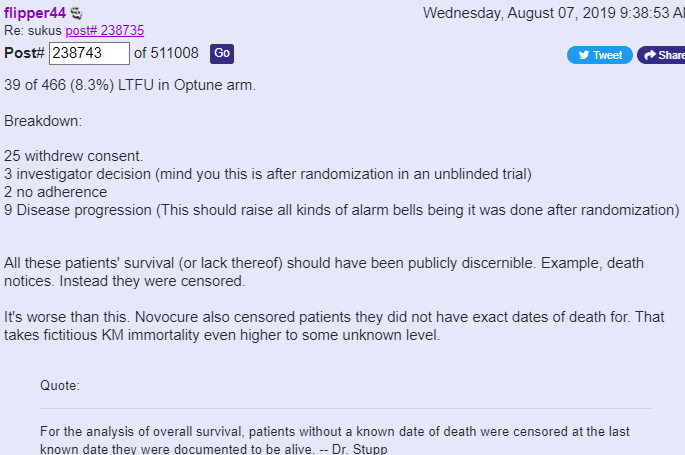 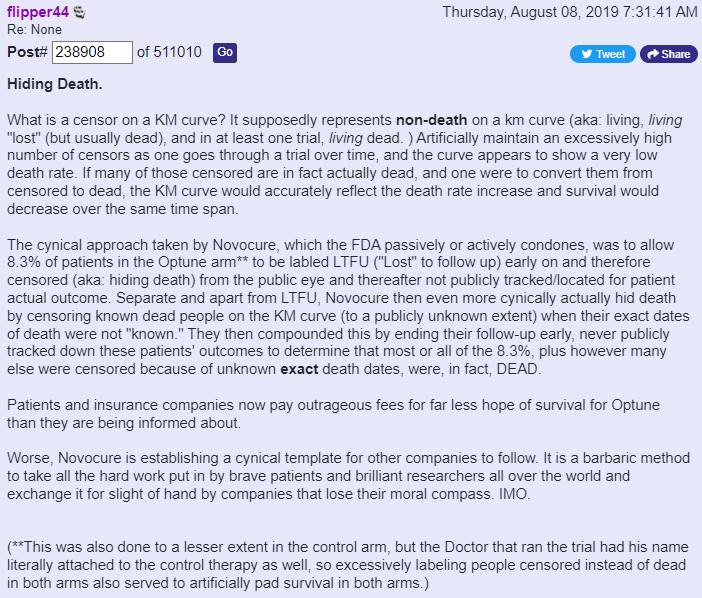 So let’s skip qick forward to the present day, where the earlier mentioned fudder on Ihub finally revealed his/her bias towards Novocure, being a shareholder.

The person in question has been polluting the board on a daily basis since around the short attack on May 10th. expressing, what is nothing more than a clinging to the established refuted arguments regarding trial design and OS endpoints.

Let’s look at the current discussion regarding Novocure

His “reveal” made him just fall back to retorting the same fudder transcript as is his raison d’etre, regarding the NWBO trial.

With the above Novocure critique from earlier on in mind, lets look into the responses. 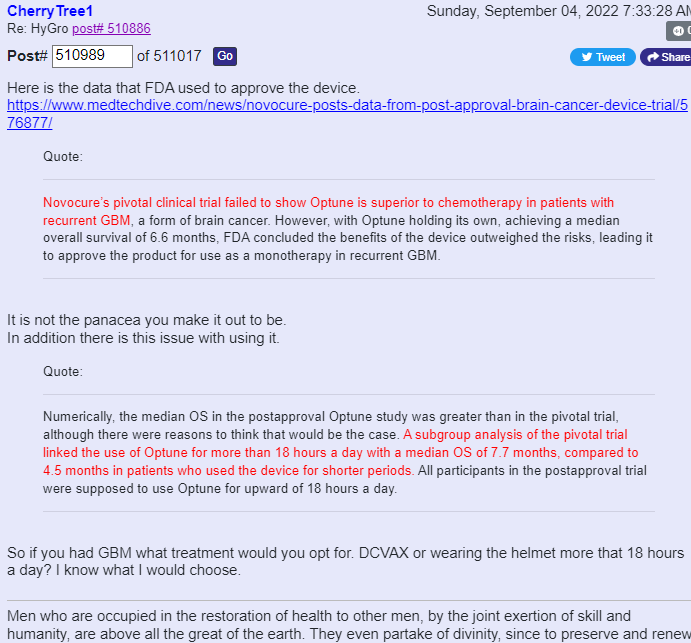 An interesting anecdote is that the Seeking Alpha article above has since been polluted with loads of comments from some of the most notorious fudders, not least the Hygro one, who chooses to remain incapable of understanding the kings english and still goes on a daily rant on stock boards repeating the same refuted arguments over and over again like a Hare Krishna mantra.

Sadly an orchestrated task, that still takes up a lot of regular Ihub’ers time and effort, refuting over and over again, in order for newer retailers, to not getting dubed into selling shares.

I still recommend you to read the Seeking Alpha article, because it quite simple tore all the favourite fud arguments to pieces, that Adam Feuerstein, bears and fudders have been primarily promoting the last couple of years. And then came the PIP approval plan from MHRA in the UK, as the kiss of death.

Which biosectinvestor on Ihub, also mentioned:

Don’t get me wrong. I’m all for litigation, lawsuit or anything, that can somehow get someone stand to answer for what went down May 10th.

Inciting a short attack that removes $1.5B market cap in 2 hours, is no little deal.

FUD have had too much to influence on everything NWBO. While we should try not to “get into any dialogue” with fudders, block them and not let their misinformation litter due diligence, it is easier said than done. There will always be newer retailers around to listen and to get the shivers and eventually selling their shares at a discount.

Personally I hope this to be my final comments on the whole ordeal since May 10th. and we will try to focus on the business, science, progress, catalysts going forward.

Fudders have literally nothing left to troll about, since approval is a given in UK and commercialization and automation has been set up to kick off. Which is why we currently see fudders back to resurrecting their old “soap with a prize inside” deals.

It’s back to talking Toucan ownership, dilution, sub-lease, linking desperately to any news about any upcoming or ongoing mice trials, that COULD have some positive outcome, within the next 5-10 years and yes … for some poor sod, even still talking about trial designs and endpoints.

Ignore. There are happy days just around the corner and we’ll be talking about those in the next article.

The SEC actually called me about the complaint I filed via the website. They called a couple of times to clarify some info I gave which reflected DD’s and LS’s summations. Crickets from them since late July. Nonetheless, another great summation to counter the “noise” here.