10K out, articles from FDA and Lancet and a "wording dispute"

The first day of spring became more news worthy to NWBO longs, than suspected. After a week of hibernation since we had the last PR - yet another british article about the Sawston production of DCVax-L - NWBO filed the 10K (A 10-K is a comprehensive report filed annually by a publicly-traded company about its financial performance and is required by the U.S. Securities and Exchange Commission), which most have expected late March, since NWBO have never filed that report so early before. But actually it WAS due March 1st. due to the company now being a “large accelerated filer”, due to a Market Cap above $750 mill.

So NWBO filed in time, as they’ve done since they changed accounting firm to Cherry Bekaert, so let’s have a quick glance at it.

DOES the 10K contain information that somehow gives us new information or can support a positive outlook on the future?

Well, taking a glance at it - and if one has NEVER read an NWBO 10K filing before - one is stricken by the somewhat pessimistic wording.

It mentions competition, personel and the possibility of a dire and troublesome future.

AS DID every other 10K in the past.

Yes, actually the wording has for several sections been almost copy/pasted from last year and there is “nothing to it”. Companies has to take all kind of legal precautions in these filings and rehashing the POSSIBLE negative outcomes of the future is “standard equipment”.

So what can we “take away” from the filing?

The 10K mentions, that NWBO is now sub-leasing 1/6 of the Sawston space of 88,000 square feet to Advent Bio, where Advent can ,manufacture and produce to another client. NWBO will be paid £500.000 a year for that.

On December 31, 2021, the Company entered into a Sub-lease Agreement (the “Agreement”) with Advent. The Agreement permits use by Advent of a portion of the space in the Sawston facility which is leased by the Company under a separate head lease with a different counterparty (Huawei) that commenced on December 14, 2018. The Company subleased approximately 14,459 square feet of the 88,000 square foot building interior space , plus corresponding exterior support space and parking. The lease payments amount under the Agreement are 2 times the 5.75 pound sterling (approximate $7.76 per square foot based on exchange rate as of December 31, 2021) rate per square foot payable under the head lease, but subject to a cap of $10 per square foot. Accordingly, the lease payments under the Sublease are set at $144,590 per year. The total lease payments paid by the Company for the facility, exterior spaces and parking under the head lease are 500,000 pounds per year . The term of the Agreement shall end on the same date as the head lease term ends.

IF NWBO could utilize around 60% of that for producing DCVax-L, that would be around 5,000 doses a year. But wait. That is the old way of manufactoring DCVax-L and NWBO is currently finishing their comparability studies of manufactoring DCVax-L, with the new Flaskworks apparatus, which will not only increase production 10-fold, but also remove the need of living up to the harsh restrictions of “clean room”.

So the Sawston facility will be able to produce at least 50.000 doses of DCvax-L, when build-out. That should make even the most bearish bull satisfied.

Of course bears have been dying to FUD about this sub-leasing and yet again try their old - and many times refuted argument - that Advent Bio somehow owns the space at Sawston.

As I wrote, it has been refuted countless times, but we know bears have run out of dignity, having seen so many of their arguments being dissolved lately.

And as flipper44 so eloquently wrote:

Sawston received the license. Who owns the lease on Sawston? Northwest. Advent has been hired by Northwest as the operator of Sawston, on Northwest’s behalf. Advent leases other space from Northwest (obviously, they can’t work on competitor’s projects in our own building!) to operate on behalf of other clients of theirs, under the Sawston license.

So no. There’s nothing negative to report with regards to the 10K. But positive, that it was filed on time, readying NWBO for what we all awaits.

Inspired by medical advancements in the field since 2016, the President’s new goals for this iteration are to reduce the death rate from cancer by at least 50 percent over the next 25 years; to improve the experience of people and their families living with and surviving cancer; and, by doing this and more, to end cancer as we know it today.

“With today’s actions the FDA is recommending important principles that involve addressing inequities, targeting the right treatments to the right patients, speeding progress against the most deadly and rare cancers, and learning from the experience of all patients,” said Richard Pazdur, M.D., Director for the FDA’s Oncology Center for Excellence. “All of these are tenets of Cancer Moonshot’s mission.”

How important is this in relation to NWBO? Well consider Sentiment Stocks comment on Ihub: 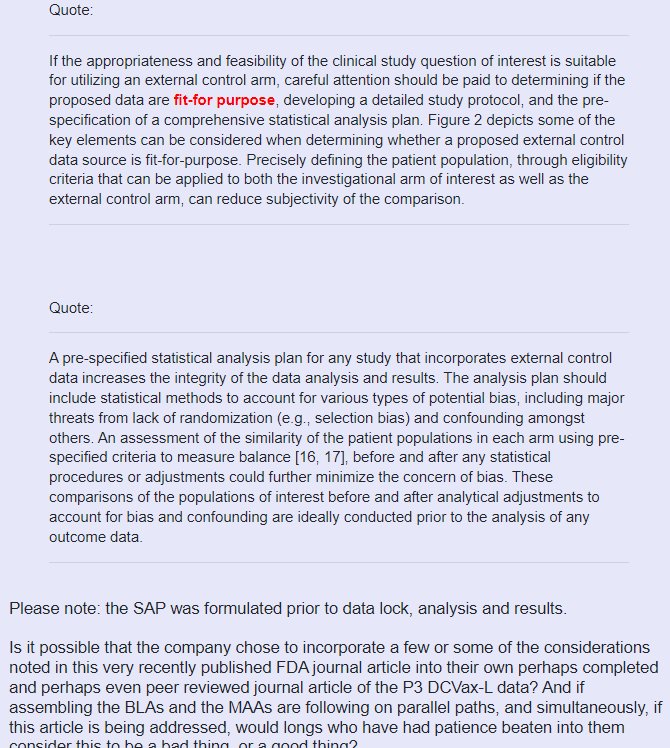 I will consider this, YET another bullish development in favor of NWBO.

Lancet published the article Progression-free survival: it is time for a new name

This has been the argument to the ongoing phase 3 trial for DCVax. It is another major supporting measure giving confidence to the scientific community behind the endpoint change of trial. 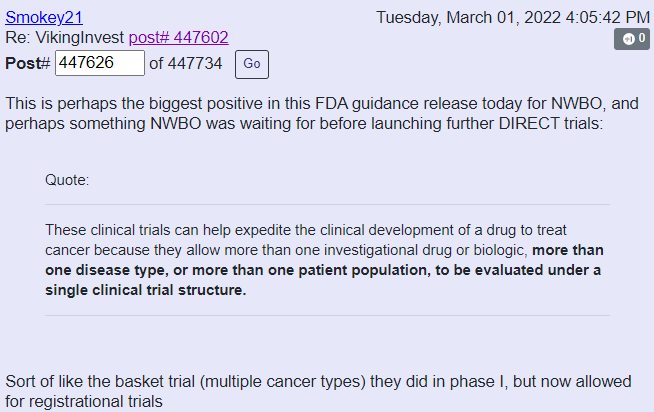